Everyone loves a good Christmas joke, especially the dad jokes which are abundant around the holiday season. So, sit back with your hot chocolate and enjoy these top 50 best Christmas dad jokes for all ages.

Ready for some Christmas dad jokes? Here you go! 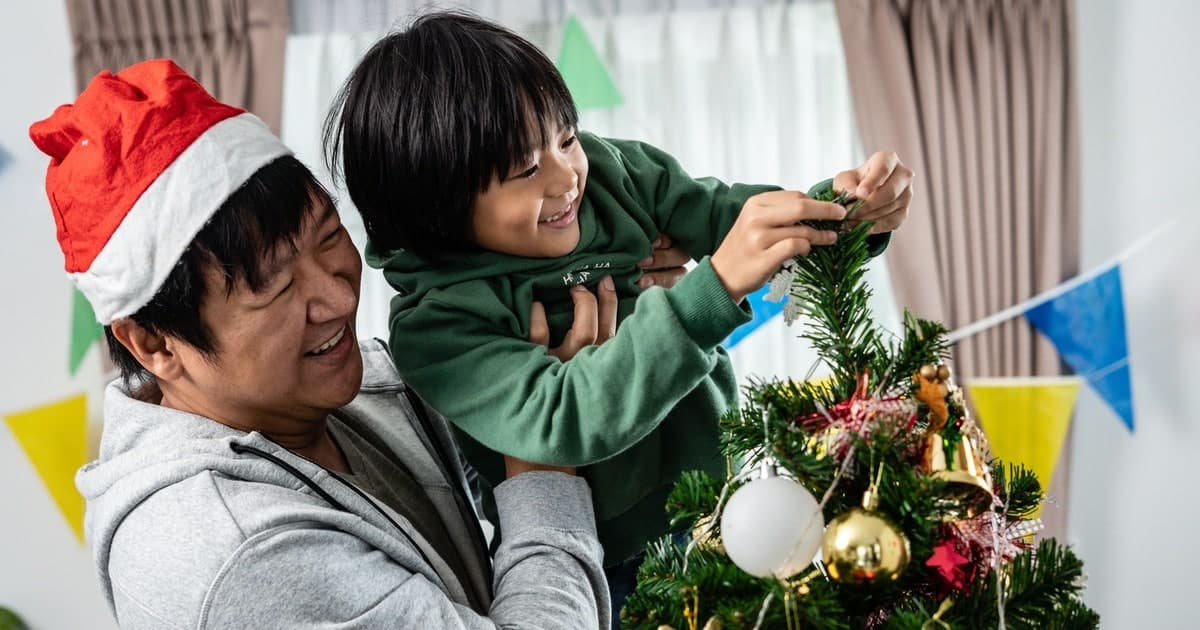 1. Why couldn’t the bicycle stand up by itself? It was two tired.

2. I’m really glad I got a Christmas present for my dad this year… a picture of him from when he was younger.

4. What do you call a snowman with a six-pack? An abdominal snowman!

5. What’s the best way to describe my dad at Christmas? Santa’s little helper!

6. Father Christmas is coming soon, so make sure your chimney is swept… and your presents are packed.

7. Why did the scarecrow win an award? Because he was outstanding in his field!

8. What kind of plate does Santa use at Christmas dinner? A ho-ho-plate!

9. Dad, what’s your favorite thing to do with me on Boxing Day? I don’t know son… it’s between watching football or having a few beers!

11. Do you know how embarrassing it is to have a father that wears an onion on his belt?! No dad, why is that? It keeps falling off!! HAHAHAHAH!!!!!!

12. How much does it cost for a cowboy to get a haircut? Ten Dollars.

13. Why did the scarecrow win an award? Because he was outstanding in his field!

15 Do you know what my dad gave me for Christmas this year… absolutely nothing!! I couldn’t believe it – I thought he knew me better than that! HAHAHA!!!

16 What do you call Batman and Robin after they’ve been on a crime-fighting spree? The exhausted dynamic duo.

17. Why is Christmas just like your job? You do all the work and your boss gets all the credit!

18. How many Santas are at Santa school each year…? Only one but it takes eight reindeer to graduate.

20. How can you tell your computer is really hungry? The monitor starts salivating! PFFFFFFFFFFFTTTT!!!!! (I laughed so hard that milk came out my nose!)

21. Why does everyone want to get coal in their stockings? Because it’s a black stocking!

22. How do you make 8 apples stand up straight? You put an apple on the bottom of each one.

24. Why is Santa so jolly? Because he knows where all the naughty girls live!

25. What happens if you don’t eat your vegetables? You can’t have any pudding! PFFFFTTT!!!! (I laughed so hard I blew milk through my nose again.)

26. “Dad, what did you do at work today?” “Oh, I just sat around all day!” HAHAHAHAHA!! The look on his face when he realized he made a mistake was priceless… I thought his head was going to explode!!!

27. What do you call a baby monkey? A banana or a mini-monkey!

28. Why couldn’t the bicycle stand up by itself? It was two tired.

29. “Dad, what happened at work today?” “It’s called ‘man down’. I’ll be home as soon as I can.” HAHAHAHAHAHHAHAHA!! When he realized how that sounded, he got all flustered and said, “I mean it literally!”

30. How does Santa get down the chimney? Chimney slides! HAHAHA!!! (That one’s better for kids!)

31. What kind of shoes would you wear to a snowman contest? Ice skates!

32. Why did the chicken go to the seance? To get in touch with her ancestors!

33. What’s the best way to describe my dad at Christmas? Santa’s little helper!

37. I’m really glad I got a Christmas present for my dad this year… a picture of him from when he was younger.

38. Father Christmas is coming soon, so make sure your chimney is swept… and your presents are packed.

40. How many reindeer does it take to change a lightbulb? None – Santa grants them an unlimited supply of light!

41. I think my dad got his sense of humor from his father… he’s not cracking one joke after another like normal people, but I can hear him laughing in his room all night long HAHAHAHHAHAHA!!! (That was the second time he laughed so hard that milk came out his nose!)

42. Did you hear about the kid who was naughty for Christmas? He got coal! HAHAHAHAHAH!! That kid must have had really strict parents!

43. There was a cowboy who loved to play poker, and he always wore his lucky horseshoe. One day he lost it, and after that he could only win about 10% of the time. The end.

45. What is Santa’s favorite TV show? The X-Files! PFFFFTTT!!! (I laughed so hard my mom almost spilled her coffee.)

46. How many reindeer does it take to change a lightbulb? Just one – but you have to believe in Rudolph! PFFFFTTT!!!

47. What do you call a girl that just broke up with Santa? A former Christmas elf! HAHAHAHAHAHAHA!!!!!!

48. What did the tree say to his friend? Bough-ro!

49. Why is Santa so jolly? Because he knows where all the naughty boys live!

50. What happened at the North Pole when it got flooded last year? The elves were displaced! HAHAHAHAHAHAAHAH!!!!! (When he laughs, milk comes out his nose…)

51. “Dad, are reindeer real?” “Yes son, they are real.” “Are unicorns real too?” “Of course!” Suddenly he realized what was saying and started laughing hysterically. Milk came out of his nose! HAHAHAHAHAHHA!!!!

52. What’s a reindeer’s favorite fruit? A sleigh-ana! (I laughed so hard I fell off my chair!)

53. Why was Santa’s helper depressed? Because he had low elf esteem!!!

54. How does Santa travel the world in one night? Magic jet propulsion!! (He said that one really seriously, and then burst into hysterical laughter.) PFFFFTTT!!!! (Again with the milk through the nose…)